We at xAmplifier stress the importance of harnessing social media platforms to engage customers, spread the word about your business, and generate new leads through ads and content campaigns. But just how do you determine which social media sites to target for your customer base? Below is a brief guide to adult social media use by gender, race, age, education, income and location based on the results of the Pew Research Center’s “Social Media Update 2013” report.* Check out the statistics to determine which sites your customers are using!

Social Media by Gender
When it comes to social media, it appears that women tend to use most sites more than men do. Pew Research Center’s Internet Project August Tracking survey revealed that women used Facebook (76%) and Instagram (20%) more than men, 66% and 15% respectively. Pinterest showed an even larger gender discrepancy, with women at 33% and men at 8%. However, not all social media sites in the survey were overpowered by women. Twitter showed fairly equal usership between men (17%) and women (18%), while more men (24%) than women (19%) claimed to use the business networking site LinkedIn. 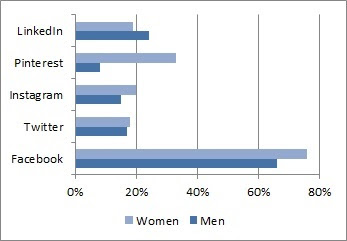 Social Media by Race
The survey showed fairly equal percentages by race for Facebook and Pinterest, but Twitter, Instagram and LinkedIn revealed some discrepancies. For example, black adults (29%) use Twitter more than both white (16%) and Hispanic adults (16%). Black (34%) and Hispanic (23%) Internet users were more likely to use Instagram than the white (12%) users surveyed. However, white (22%) and black (30%) adults were more likely to use LinkedIn than Hispanics (13%). Facebook is an excellent way to reach any customer, as Pew’s survey revealed that white (71%), black (76%), and Hispanic (73%) adults used the social utility the most. 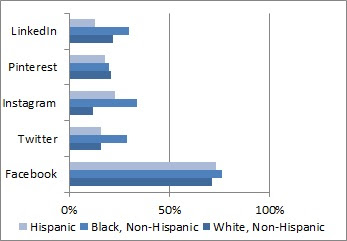 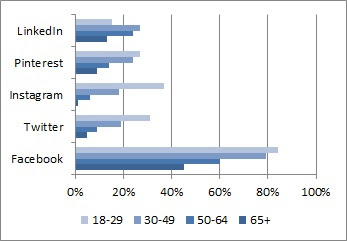 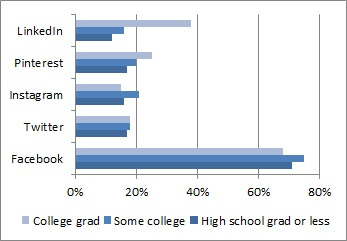 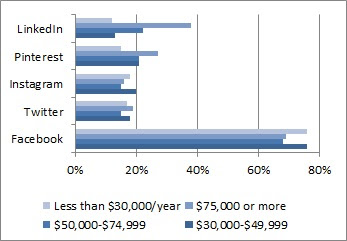 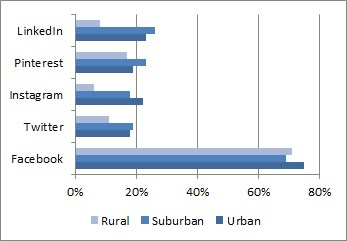 What is NPS®? Developed and trademarked by Fred Reichheld, Bain & Company, and Satmetrix, NPS® begins with a simple question to your customer: How likely is it that you would recommend (your company) to a friend? The question is answered on a 0-10 scale which divides your customers three categories

To calculate your NPS®, you simply subtract the percentage of customers who are Detractors from the percentage who are Promoters, making your Net Promoter Score® a number between -100 and 100.

General Score Guidelines  As a general rule of thumb1, an NPS® score above 50 is considered very good, a score of 30-49 is considered good (but with some room for improvement), and a score of 30 is considered average for most industries. Scores much lower than 30, especially if they’re in the negative range, are a red flag and may inhibit business growth. You may want to survey or talk to your customers to pinpoint the exact causes of dissatisfaction and address them immediately.

Different Industries, Different Standards Each industry’s benchmarks for NPS® are unique, so what is considered good for an investment firm, for instance, might be below average or poor for an auto dealer. While raw numbers are helpful, it is important to consider your NPS®  in the context of your industry and your competitors. Consider these numbers from one 2013 study2:

More Responses, More Accuracy Another factor to consider when looking at your NPS®  is how many results it’s based on. While an NPS® of 50 is something to be proud of, you may want to temper your celebration if it’s based on two surveys. The more responses you get, the more secure you can feel in the accuracy of your NPS® Net Promoter Score® is a wonderful tool, but knowing how satisfied your customers are isn’t helpful unless you also know what factors led to that satisfaction. That’s why xAmplifier’s surveys begin with NPS® and then mine more specific information about what your customers did and didn’t like about their experience. By knowing their decision drivers and opinions, you can begin to work at specific changes to boost your NPS® and your business!

Satmetrix released its own 2013 study

(http://www.insightsfromanalytics.com/blog/bid/324678/Top-10-U-S-Net-Promoter-Scores-NPS-for-2013) and while it found most of the same industry-leading companies, its numbers trended higher.

Online and social media presence is the fastest growing driver of new business in almost every major industry. With this in mind, xAmplifier offers its clients an array of Digital Reputation Management services including:

– Analysis of customer demographics to determine which social media and review platforms companies should focus on
– Monitoring of scores and comments on said review and social sites
– Collection of satisfaction data and testimonials directly from customers via online and phone surveys
– And of course, amplification by relaying reputation-building statistics and stories through press releases and case studies, urging satisfied customers to post reviews, and providing strategies for core-customer engagement on social media

Social media trends move a mile a minute, so our digital reputation experts are always looking for the freshest resources to give our customer that special “X-factor.” Below are some of our favorite sites and tools for social media management:

This social media management platform recognizes that social media is an essential part of brand and customer relationships and offers a number of palatable guides aimed at helping companies strengthen their social media image, from “5 Habits of Successful Social Media Managers” to “10 Ways to Engage on LinkedIn.”

A technology news site focused on disruptive technology, VentureBeat publishes news stories and analysis pieces. Founded in 2006 by Matt Marshall, VentureBeat was named one of the top blogs of 2008 by the New York Times.

Featured on the Marketing Profs’ “Digital Marketers on Twitter: What They Share, Whom They Retweet,” The Next Web, founded in 2008, manages several initiatives focused on international technology news, business, and culture.